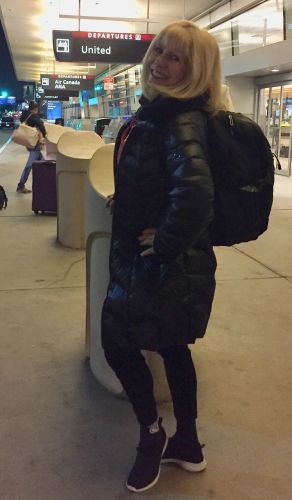 I didn’t read the fine print. I mean, really, who does? After my latest flight purchased through Cheap Tickets, I do from now on.

I was excited to be visiting Lynn and Lucas at their home in Puerto Rico, a trip we had been planning for months. I didn’t care that it was a red-eye. After all, once you’ve flown for TIA you can live through any flight, never mind that I flew in the 70s. Yes, folks, that was fifty years ago! Shhhh.

A couple of days before departure I texted Lynn. “I’m all packed. I even got a new suitcase that isn’t humungous like that monstrosity I brought for the Thanksgiving trip. I swear it didn’t look that big in the store. I had to bring all those bulky clothes to Chicago so I needed the room. But now I have a nice medium size one with plenty of space for little sundresses and the like.”

Lynn replied,  “Lucas got us concert tickets so we have to go directly from the airport after you land. He’s worried we might be late if you check a bag.”

“Oh, that’s okay. I’ll just transfer everything into a carry-on.” Hmmm, I thought I saw something about carry-ons in the rules and regulations I glanced at when I printed the ticket. Yes, I’m old-school — I still print tickets.

There was a list of nine restrictions attached to my ticket. It clearly stated in bold letters, Carry-on bag not allowed. In addition, it said no upgrades, pay to choose your seat, and board in the last group. Yes, I could read, but surely they mean no carry-ons unless you pay extra.

I called CheapTickets. A very polite young man with an accent explained that no carry-ons were allowed with this ticket no matter how much I paid. He wished me a nice day and suggested I call the airline directly. I called United and the less-than-polite lady on the phone impatiently told me I was traveling on a basic economy ticket. Only people with regular economy ticket could take a carry-on.

“Oh, okay. Can you switch me to regular, then?”

“Oh, no, ma’am. It clearly states that no upgrades are allowed with this ticket. You would have to cancel the ticket and get a new one. Would you like to do that?”

“No, thank you,” I replied in a saccharine voice and hung up.

I re-read the rules and regulations. Ahhhh, bring a personal item was on there. I had just bought a new backpack at Ross on Tuesday (senior discount day) which had a special laptop sleeve built in. If I rolled up my Puerto Rico wardrobe tightly, I could fit the essentials in. Plus, I could wear a bunch of stuff on the plane and wear my coat with the big pockets and stuff those to the bursting point.

Plus, what’s the worst that can happen if I don’t bring any luggage at all? My son and his wife went on vacation to Jamaica and their luggage was lost. The airline gave them an allowance to buy some clothes but they weren’t anywhere near any clothing stores. The price of the taxi to get to the downtown was beyond their budget so they just went to the onsite gift store where they purchased bathing suits and coverups all in the typical reggae colors — black, red, gold and green. Although they were promised delivery of their bags every day they hadn’t shown up by day six of their week’s vacation. They just wore the same outfits all week, and the other hotel guests thought they were weird. It can be done.

I had to practice ahead of flight day to make sure this was a viable plan. I donned three sets of underwear (three bras and three panties plus one for good measure, so four panties), two bathing suits — a bikini and a one-piece, and four tops over the bathing suits. I could barely breathe. I put on the big coat and wiggled into the backpack straps and stood there for a couple of minutes. Yes! I can do this.

It wasn’t until I got to the airport for my 10:45 pm departure that I realized the big problem here. The one-piece was sandwiched in between shirt numbers two and three. I was walking toward the ladies’ room when the lightbulb went on. Uh oh! Without stripping down to take care of business, I would have to hang my overstuffed backpack on the door hook and drape the enormous winter coat over it then use both hands to well…you know.

By the time I got to my Chicago layover, I wanted to rip off all fourteen articles of clothing off and run through the airport naked. Oh but wait, I did that on a DC10 in 1976! I toughed it out and boarded the flight to San Juan prepared to visit the lavatory as soon as the fasten seat belt sign went off. I stuffed all the extra clothing into a garbage bag and carried it off the plane with my backpack. I boarded the plane with one personal item and deplaned with two. I hope nobody turns me in to the basic economy police and next time I will read the fine print in advance!

This could happen to you if you buy a cheap ticket on CheapTickets. Just sayin’. Be forewarned. It all worked out in the end and the cheap ticket left us lots of room for Happy Hour…pink!