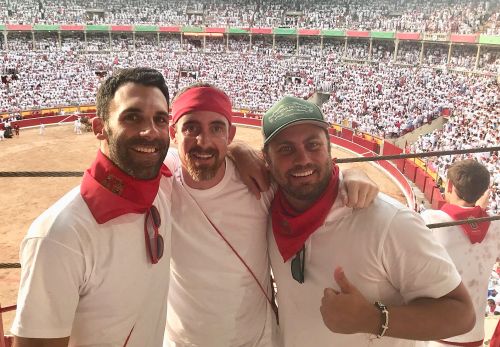 I got this photo as a text from my son, Tyler, on a Monday. I had casually asked him a question and he replied that he was in Spain. I said I was jealous, as I am of many of his world-travels and then this photo arrived. I smiled and replied “nice!”

And then a couple of minutes later I did a double-take!

“We ran! Saturday. So great. Fifteen years later and it’s exactly the same – everyone partying in the streets around the clock.”

I remember when he did it the first time. I heard about it after the fact – after he had to scale the wooden fence in the bullring to keep from getting gored. I thought he had checked this off his bucket list. When his friend, Brendan, said he wanted to do something special for his bachelor party, Tyler got a twinkle in his eye. And the plan was laid.

The adventurous trio met in Barcelona and took the two and a half hour train ride to Pamplona where preparations for the nine-day festival were underway. The Pamplonians do not mess around! People vacate their apartments and install bunk beds which they rent to visitors from all over the world! Tyler, Drew, and Brandon bunked in with two Canadians and became fast friends sharing tips and hints that could enhance their experience and maybe even save their lives.

For a full description of the event go to Wikipedia:

Dressed in traditional attire – white pants, white T-shirt, red sash and red bandana the three guys from Santa Cruz, California entered the waiting pen at the required time of 7:00 a.m. If you’re not in by 7, you’re out for the day … try again the next day. You have six more days to get in on the action. And there are new bulls every day, mostly because the ones that ran the day before are dead. They fight in the ring that night and get killed. Well, most of them do -– the extra-strong ones that are slightly alive, which is mostly dead, are dragged off and nurtured back to health so they can be a stud for another generation of extra-strong bulls.

The first day’s runners were packed tightly in the waiting pen with the mostly English-speaking crowd. Most of the local Spaniards gravitated toward the back of the pack to be closer to the bulls when they are released. As the three guys were strategizing to maximize their run they felt a few drops from above. Was somebody from the overstuffed balconies that line the course shooting them with a water gun? Nope. It was raining! The already slick cobblestones would be even more treacherous with rain. One slip of the two-thousand-pound bull’s hoof and bam! You’re spread-eagled on the ground with hordes of people running over you. Turns out the most dangerous part of the event are the nine hundred and ninety-nine other people all smushed together in a narrow space that funnels into the tunnel that squeezes down to one gate-opening leading into the ring. Bodies are flung everywhere and if you are to avoid getting crushed it’s best to have your reflexes on high alert. Football tactics and high-hurdle training come into play at times. Avoiding fallen runners is more challenging than out-maneuvering six speeding bulls.

After about fifteen minutes of downpour, the rain stopped. Whew! One less thing. Now they could focus on watching the overhead camera that rotated indicating the position of the bulls. Deciding when to take off running is more of an art than a science. If you time it just right you sprint as soon as the camera rotates toward the curve in the course. That gives you the perfect timing to be close to the bulls as they charge past, but not too close as to take a “ride on the horns.”

All three guys survived the exhilarating run, raised a glass of Sangria to their success, danced down the streets with the locals, joined parades, exchanged stories with old men who ran and danced right alongside the young bucks, and another check mark on the bucket list was done.

After hearing the story I started thinking … I have a zero birthday in my future (at least I think I do although it is several years away). People often ask me how I will top skydiving, bungee jumping and Playboy Bunny Ring Girl antics for my next big birthday. Hmmm … Do they allow female octogenarians to run with the bulls?

Stick around. We shall see!

8 thoughts on “Running With the Bulls!”