As soon as I took the first step up the walkway to Frank’s house it hit me. Damn! I forgot the key. Did I have to admit to Frank that I forgot the key again? The last time I forgot it I scurried home, which is only five minutes away, to retrieve it, I figured I could get there and back without him noticing I was late.

Frank is the eighty-nine-year-old diabetic I administer insulin shots to because his eyesight has been affected, and he can’t see the numbers on the insulin pen. Well, he sure can see the numbers on the clock! When I didn’t arrive at five o’clock sharp, Frank called his daughter to make sure I was alright. I make a point to be exactly on time twice a day –  9:00 am and 5:00 pm.  Sometimes I arrive a few minutes early, but I read in the car or listen to NPR. I don’t ring the buzzer early. That way Frank has a chance to prepare for my arrival.

There is a buzzer system in the lobby which has been working perfectly until a month ago. Typically there are people coming and going and, since most recognize me as a regular visitor, they offer to let me in. I normally decline saying I want to give Frank a heads-up that I’m coming, and I ring his apartment. Then he hits the buzzer that opens the front door to the grounds.

He unlocks the door to his place so I can just walk in. Oh, and he has time to put his pants on. You know how it is – he’s a guy. Guys sometimes sit around in their boxers watching the game.

When the buzzer system went on the fritz, and nobody was coming or going, I texted Frank’s daughter, Maria. She called her dad, and they agreed that I should walk around to the back of the building, and Frank would throw a key off his third-floor balcony. I jokingly said, “Or I could just scale the fence.”

Her reply was, “Hahaha…not unless somebody videos it.”

And so, the seed was planted.

I take care of Frank Monday evenings through Friday mornings. I typically take the key to his building off my keyring on weekends for a variety of reasons. Depending on how many dogs I’m walking or overnight pet-sitting I am doing, I carry a lot of keys. I don’t like to carry them if not needed. This can backfire, like when I pull up to walk the sheep-dogs in Rio Del Mar, a fair distance from my house. Twice it has happened. I pull into the driveway and realize the key is still on my board at home. I simply sigh and go home to get it…nobody’s fault but my own! The dogs don’t know I’m late.

The second time I forgot the key to Frank’s, the mailman happened to be in the lobby.

We have exchanged greetings many times since we both tend to arrive in the lobby at precisely five o’clock.

He smiled and said, “No, but I can boost you over the fence if you like.”

Just when I was seriously considering his offer somebody came and opened the door. That somebody was Frank’s son coming to retrieve the mail. I confessed that I had forgotten the key. That’s twice.

Yesterday was a stellar day in Capitola. The sun was out, the temperature was perfect, I was feeling particularly energetic after my morning boxing class and decided to clean out my fridge. When I realized I had too much cheese I decided to share with some of the folks in my complex. I packaged up some lovely slices of provolone to bring to my Italian neighbor. He was delighted to see me, happy to accept the cheese, and invited me in for a visit.

“Hey, Carole Jean, it’s good to see you! It’s a beautiful day. Come, let’s sit on my patio and sip a little Rosé.”

And so we visited for a while, sipping the wine, catching up on life and solving the problems of the world. It was early yet. I still had a couple of hours before I had to go see Frank.

Like I said, as soon as I took the first step toward the main entrance to Frank’s building my stomach dropped. The key! Noooooo!!!! It was five on the nose. I had a choice. I could drive home and get it, in which case I would be late, and have to call and admit I forgot the key. Again. Orrrrrr…

Surely there must be a spot along the wooden fence that would be easy. Maybe in the corner where the staircase intersected? I tried it. Nope. Too risky. I walked the length of the fence. And there it was! A foothold. All I needed to do was get one foot on the faucet, fling my leg over the top and jump down to the other side. 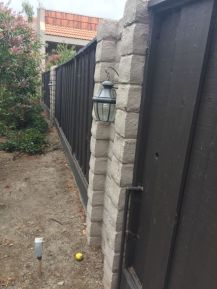 I looked around and didn’t see anybody in the vicinity. I didn’t think about it, I just did it. As I straddled the top of the fence, I was happy to see a block of wood holding the hose bib. Yes! If I could just get one foot on that I could launch myself onto the grass. I landed and heard a voice.

“We didn’t think you would make it, but you did. Yay!”

I blinked in the sun as I looked up to the third-floor outdoor walkway. There stood two smiling gray-haired ladies with walkers.

“Oh!” I cried, “Please don’t tell on me. I have to give a shot to a diabetic who is waiting, and the buzzer is broken.”

One of the ladies answered, “Yes. It’s been broken all week. Don’t worry, we’ll stand up for you if anybody asks. That was the most fun we’ve had all week!”

I blame it on the Rosé. And I have the shirt to prove it! And I now keep the key with me at all times.

10 thoughts on “Sometimes Ya Gotta Scale the Wall!”