The first time I heard the snoring I was in a crowded room of art viewers. They had come to Open Studios in Santa Cruz for the annual event. Some came for the event and others came to see the new house built by the well-known popular artist, Sally,  and her husband, Lee.

Oh, what a house! The first time I visited, I had a moment of confusion. I walked into the kitchen and had a sense of déjá vu. Wait a minute! This is the same kitchen they had in the last house.

The couple watched me in amusement as the look of confusion dissolved and was replaced by a big smile. “You built the same kitchen!” I cried.

They laughed and Sally said, “Yes! We liked it so much we replicated it.” Well, that would make my job as “kitchen assistant” go smoothly as I knew the layout. Except for one thing. The pull-out cabinet that housed the trash had been moved. The first time I went to toss some rubbish and reached for the customary handle, I stopped short and blankly stared at the bookshelf that was in its place. Lee saw me do it, ticked is head and said, “Other side. We moved it closer to the sink. It’s really the only change we made. Don’t worry, we all do it – you know, try to throw the trash in the bookcase. It takes a while, but you’ll get used to it.”

As I got busy preparing the amazing spread Sally puts out every year for her guests, I paused, cocked my head,and listened. “Somebody is snoring! Snoring. And loud? Loud enough to beat the band! I thought perhaps the Giant from Jack and the Beanstalk had sneaked in and was sleeping under the table.

And then I saw the culprit! It was Chelsea, the Cocker Spaniel. She was just laying there in the middle of the floor paying no attention to the hundreds of people who were stepping over her. Ah, to be able to sleep like that!

So when Sally and Lee asked me to house/pet-sit while they went on vacation, I jumped at the chance. Sally warned me, “You might want to bring some earplugs. You know,” as she ticked her chin toward the dog. “The snoring never stops. She will sleep in the room with you, because even though she can’t hear, she is used to being near humans at night. She is getting on in years, you know. Fourteen, I think.”

I am not one for earplugs. Or eye-masks. I can barely wear a hat or a ponytail due to my sensitive head. I’ve always been that way. As a child, I would start the day with my hair in braids or bound by a rubber band. By the end of the day I ripped out whatever was confining me, and let my hair run wild. So, no earplugs for me.

I will admit the snoring was interfering with my sleep the first few nights of my assignment. But, being adaptable, I grew accustomed to the rhythmic sound and it ceased to be an issue. And then the assignment ended and I went back to my own home.

I tossed and turned, tossed and turned. I took a Benadryl which usually puts me out within a short time. And then the light bulb went on! It was too quiet; there was no snoring dog in the room. Time to re-set and adapt. Maybe if I put the ticking cat on my nightstand… 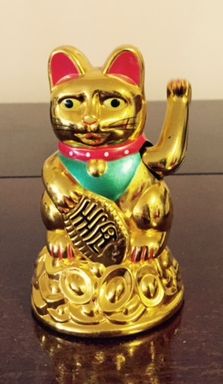