I miss artichokes; extra-large plump artichokes. Living in Costa Rica, I was thrilled to find artichokes occasionally gracing the shelves of my local market. They are lovely served with garlic lemon butter which I prefer over the popular mayonnaise dip. They are especially nice stuffed Italian style.

But nothing compares to Northern California artichokes. Santa Cruz, my hometown for over twenty years is a mere thirty minutes from Castroville, the Artichoke Center of the World, according to the city’s welcome sign. I always thought it was the artichoke Capital of the world and that Marilyn Monroe, then Norma Jean, was the first Artichoke Queen in 1947. Turns out, according to Wikipedia, Marilyn was Castroville’s first honorary Artichoke Queen in 1948. Mrs. Sally DeSante Hebert was crowned first Artichoke Queen in 1947. Interesting trivia, but does not really address the heart of the matter – so back to the chokes. Although most of the artichoke publicity goes to Castroville, the foggy north coast of Santa Cruz also has fields and fields of artichoke plants.

While visiting Aptos (Santa Cruz County) recently, I went to the supermarket with my hostess for a few supplies. As we roamed the aisles looking for the perfect cheese to go with the California chardonnay, another dearly missed staple I do not get in Costa Rica, I spied the produce section.  My outstretched hand seemed to have a life of its own as it led me across the room to the artichoke display. I picked out a big, fat beauty, cradled it to the cart and envisioned a perfectly steamed treat in the near future. On this visit, I was heavily scheduled with dinners out, an army of friends to visit, and didn’t  foresee a time-slot for cooking an artichoke at home. But, I bought it anyway.

Artichokes can stay firm and fresh for up to 2 weeks. A whole week went by and I didn’t have the opportunity to cook it. It was time to move on to the next phase of my visit; I was off to Walnut Creek. My friend, who kindly hosted me all week helped me load my luggage into the rental car. As I started the engine, I gasped. “Oh no, the artichoke!” I ran back into the house, tore open the vegetable bin in the fridge and snatched it out. “I want this!” I whispered to nobody in particular, stuffed it into my purse, and raced out to the running car.

When I arrived at my cousin’s house in Walnut Creek, I fished the artichoke out of my purse, placed it on the counter, and said to the puzzled host, “Oh, hi. I brought an artichoke.”  I mean really, who brings one artichoke to a house? You bring flowers, a box of chocolates, a bottle of wine, but one artichoke, which was starting to show some wear and tear from all the travel?

“If you want this nice artichoke, go ahead and cook it,” I said to be polite since I was dashing out to meet some friends for dinner in San Francisco. I was hoping he would forget and it would still be there in the morning so I could cook it the next day. He cocked his head, wrinkled his brow, screwed his lips up to the side, and said. “Uh, thanks,” and proceeded to make a protein shake for his after-workout dinner.

Off I went to have a fabulous time with my friends in the city, never giving the artichoke another thought. Fortunately, I was staying in a separate pool cabana far enough from the main house as to not disturb the guests when I returned at a late hour. In the morning, I followed my nose to the kitchen of the main house where some heavenly Peet’s coffee was brewing. As I reached into the fridge for the half and half, there on the shelf sat the lone artichoke, standing tall, trimmed up and ready for the pot.

Speaking of pot, one of the other house-guests was in pot heaven. With the advent of medicinal marijuana shops in many parts of California, it seems that more than half the population carries a card entitling them to buy legal cannabis. He lit up in the morning and filled the house with that musky pungent aroma that used to raise eyebrows. And so began my day.

I plunked that darn artichoke in a copper-bottomed pot, put about two inches of water in the bottom for steaming, put the lid on and walked away. I did not plan on eating it for breakfast – I planned just to have it cooked and placed in the fridge for nibbling at some point in the day. It was time; I refused to let this baby go past it’s prime and get tossed.

It was then that my cell phone rang with an urgent plea. Some friends from Chicago visiting San Francisco had gotten locked out of their apartment. The only other key in existence was in my possession. They couldn’t call a locksmith because they were subletting from a couple on a month-long vacation and could not prove residency. They were desperate! They offered to drive to me, pick up the keys, unlock the door, retrieve the keys left on the counter, and drive the keys back to me.

“Unheard of,” said I. “I will drive them to you. I know my way around, and traffic coming into the city at this hour isn’t bad. I’ll see you in an hour.”

I clicked along the freeway, got over the Bay Bridge smoothly, and was headed toward the apartment when my phone rang. I hesitated since I was driving, but saw it was from the Walnut Creek house where I was staying. On the other end, the woman said, “A terrible thing happened.”

“WHAT?!” I screamed as my stomach clenched and adrenaline shot up my spine.

“Your artichoke burned.” said the woman.

I relaxed. “Oh, no. I forgot about it and flew out the door. Good thing you were there. Thanks.”

“Well, it’s really bad. The pot is totally black and probably ruined. You’ll have to buy a new one.”

“O.K. That’s the least of it. Didn’t you smell it burning? I’m just thankful you caught it before I burned the whole house down.”

“Yeah, well I smelled something, but I just thought it was that guy’s pot. You know the one who smokes pot all day?”

“Well, alrighty then. I’ll be back this afternoon with some Twinkle and steel wool. Maybe I can clean it up. I’m so sorry. Thanks again. See ya later.”

I completed my mission, drove back to Walnut Creek, walked into the house that reeked of burned matter, opened all the doors and windows, put all ceiling fans on high and went to work scrubbing. I got the pot back to gleaming, crunched fresh lemons down the garbage disposal, and thanked my lucky stars I hadn’t caused a house fire. 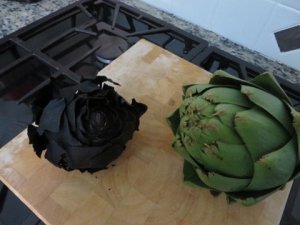 I bought a new artichoke

My awareness has been raised, I have forced myself to slow down and take inventory before I walk, not run, out the door. I am lucky. It coulda been a whole lot worse!

26 thoughts on “It Coulda Been Worse!”