Bimbo’s? We were going to a place called Bimbo’s? Probably a bunch of bimbos in there is why it’s called that. I was part of Eddie, the choreographer’s, entourage. We arrived in a black stretch limo, which picked us up at the Off Broadway, just a few blocks away from Bimbo’s. As I exited the car and stepped onto the sidewalk in front of Bimbo’s, I had no idea what was behind those modest doors; I didn’t expect much.

I had never been to Las Vegas. I had just moved back to California from St. Thomas where I worked in a nightclub on Charlotte Amalie’s waterfront. Le Club was considered exclusive; it paled in comparison to the scene set before me. I felt a jolt of electricity flow through me and I just stood there taking it all in.

The stage grabbed my attention as I imagined what was about to happen there. I was shaken out of my trance by another new girl from the Off Broadway, Loretta, whose last job was shaking her booty for Dan Hicks and His Hot Licks. At the time, I had not heard of him, but she swore he was legit and she danced in the back-up group. And no, it wasn’t topless.

The house filled up, the lights dimmed, the crowd hushed, and the curtains parted. Carol Doda strutted to center stage, and started her act fully clothed, as usual. Once she did her opening monologue kibitzing with the audience, the dancers came out and the energy was coursing through my veins! The costumes, the head-dresses, the magnificent ostrich plumes and glittering sequins; I was mesmerized. I had to be in this show. Oh, but wait, they’re topless!

What do I do now?

If I audition and get the part – and of course, I will get the part – I’m going to have to go topless. What’s the big deal anyway? Who decided nudity was a bad thing? The Puritans? African cultures don’t think twice about it; all those National Geographic photos proved it.

The truth was, I was embarrassed. Not only was I sparsely endowed, my right boobie was smaller than the left; much smaller. It was almost as though it got stuck in the trainer bra stage. I never let anybody see me naked. In romantic situations, I insisted on candle light and only whipped off the bra under the covers.

How badly did I want to be in this show?

I had performed in many dance recitals throughout college, starred in two high school plays: I played Mata Hari in Little Mary Sunshine, and played the part of Gypsy Rose Lee in Gypsy. Okay, it was high school; high school counts. It was performing in front of a live audience on a stage. I sang, I danced, I loved it. Dancing was my forté; the singing, not so much. I had to carry off my songs with stage presence and personality. But the dancing, I loved. I was good at it, and I must be in this show! I would just have to dazzle them with my dancing, and distract them with my fine-looking butt, and a few peacock feathers.

I dug in and decided to just hold my head up high. I would dance my heart out and hope they didn’t notice my mismatched little lulus. I made it through the audition, I learned all the dance routines, I learned to pantomime words to the songs Carol Doda sang; “Something in the way he moves….” I can still hear her in my head. When you do the same show night after night, which was performed on a smaller scale than the Bimbo show I had initially seen, it becomes a rote performance. Eddie Belasco scaled it down and ran two shows a night at the smaller venue, the Off Broadway Club.

I became part of the North Beach scene. In between shows, I went to Enrico’s on Broadway and devoured a nightly hot fudge sundae while Jonathan Winters and Bill Cosby hung out at the bar. I got to know Carol Doda, the person, not the “Twin Peaks” celebrity version famous for going  from a 34B to a 44 DD bra size, with the aid of silicon injections. Yeah, shots! This was before implants were invented.

I was surprised to learn she was a sweet, shy, lonely lady. We got to be friends of a sort; not too close as I was very busy holding down two jobs, plus attending San Francisco State to obtain my California teaching credential. Once a week or so Carol and I went to late suppers at New Joe’s or Vanessi’s on Broadway. I remember, she always ordered gnocchi, and I ordered seafood sauté. 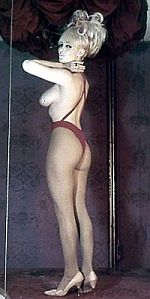 It felt more like a family affair than anything associated with sex shows. Wherever we went in North Beach, the “boys” looked out for us. It wasn’t until later I had to get a body-guard to keep me alive after threats from the barker I briefly took up with.

Hear more about him in Part 4!

6 thoughts on “New Barker in the Neighborhood – Part 3”