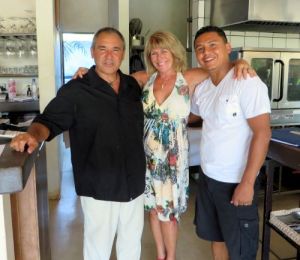 While visiting my family in Nosara, my folks invited me along on an outing that had been planned by a group of expat friends. It was to be a gourmet lunch in Playa Negra, a sleepy beach town on the Guanacaste Peninsula. Ha! I had been to Playa Negra; it was a couple of hours away on a bumpy dirt road. Here in Costa Rica we are at the tail end of the dry season, and I do mean DRY! Not a drop of rain has fallen since November, and the dirt is pulverized to a fine powder that permeates everything. Gourmet restaurant indeed! I came close to bowing out, but decided to just go along since I don’t get to spend much quality time with my precious mom and “Papa Nuevo” (he’s been my “new” dad for 22 years!), even though I live in Atenas, a mere 4 hours away.

The plan was to drive to one of the group’s house in San Juanillo; a forty-five minute drive from Nosara ( round off to one hour). One must allow for delays such as shooing cows off the road. We were to meet the other 16 diners, car-pool, and then continue to the restaurant as a group – round off to another hour’s journey. So far I’m thinking it’s a 4 hour investment and I haven’t even had a cracker and cheese yet.

As we drove over the “Rasta” Bridge, or the “Bob Marley Bridge” depending on whom you’re talking to, the red, yellow, green, and black metal posts were covered in a thick layer of dust making them look dull and lifeless. I rolled my eyes and asked myself what I was doing there when I could have stayed home at El Sueño de Mariana enjoying the infinity edge pool and an umbrella drink overlooking the ocean. Radio Dos was fading in and out on the car radio:  I could make out Paul Simon singing “just slip out the back, Jack, make a new plan Stan” and I thought maybe I should have when I had the chance.I mean, really, how good could this place be?

My question was answered the moment we entered Villa Deevena.

Yes, it was that good. I melted, swooned, and cooed just at the sight of the opening scene: Crisp white wine being poured into elegant sparkling glasses and handed to each new arrival, trays of lightly battered, finished in a spicy honey, popcorn shrimp being passed around with white cocktail napkins slipped into your hand beneath the scrumptious hors d’ouevre, with the smoothness of a prestidigitator.

We were warmly welcomed, all 19 of us, by Dean, Chef Patrick’s son, as well as the staff. I had heard some chatter about the chef being a “Chef for the Presidents”. What presidents? Oh, U. S. presidents. Casually placed at the end of the bar is a scrap-book. It looks like any family album you might find on someone’s coffee table. I flipped open the cover, and there was Chef Patrick Jamon with THE Julia Child, all looking relaxed and happy. As I flipped through there were photos with Gerald Ford, Jimmy Carter, George Bush, and, and, and … many more dignitaries. I heard he has cooked for every U.S. President since Gerald Ford; 22 years of cooking for presidents.

Here, at Villa Deevena, in Playa Negra, on April 6, 2014, I had the finest meal of my life aside from my son’s college graduation  dinner at Le Bec Fin on Rittenhouse Square  in Philadelphia. Each and every dish, of our nine-course lunch was a work of art and could have a meal in itself.

The first dish we sat down to was the tuna, freshly caught by Dean. I moaned with delight as one of the diners at my table said: “And that’s just the beginning!” Somebody else said: “I feel like a President.” Another added: “This is better than Fleur de Lys in San Francisco! Maybe even better than The French Laundry in Yountville.”

We had, among our group of Americans, Germans, and Swiss expats at least one professional gourmet chef and several amateurs, not to mention the diners with sophisticated palates. We were a willing, knowledgeable group panting with pleasure.

The wine was endless. I didn’t note the name of the Sauvignon Blanc that was being poured, but it was the perfect choice for the balmy afternoon where we sat at a round table over-looking a pristine pool. A beautiful red was offered with the filet mignon, the best beef I have had in Costa Rica. Our water glasses were topped off regularly with a refreshing designer bottled water. Someone noticed the sparkling Pelligrino being served to one person and little by little we all switched to the bubbly water. By the giddiness of the group as each course was brought we might as well have been sipping champagne!

We topped off with espresso or cappuccino, after which I waddled over to ask for a photo with Chef Patrick and our delightful Costa Rican waiter, whose name I did not catch. His smile never wavered, he seamlessly replaced silverware as it was used, and he whipped new dishes in front of us that seemed to appear out of nowhere. I occasionally glanced at the open kitchen which transported me to restaurants where I have sat at the counter watching the chefs perform, such as Emeril’s in New Orleans. Yes, it was in THAT category.

It wasn’t until we were leaving, after 3 hours of superb dining, that I realized Villa Deveena is a boutique hotel with 6 elegant bungalows positioned around the pool. Next time we will spend the night!

Patrick and family give you the royal treatment whether you are a President or not! I can hardly wait to return with friends, even if it takes hours and hours on a bumpy dusty road in the middle of nowhere. It is well worth it! 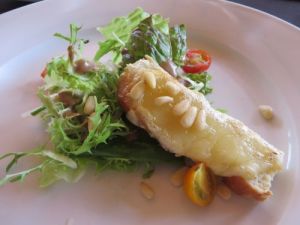 16 thoughts on “Bon Appétit in the Jungle”