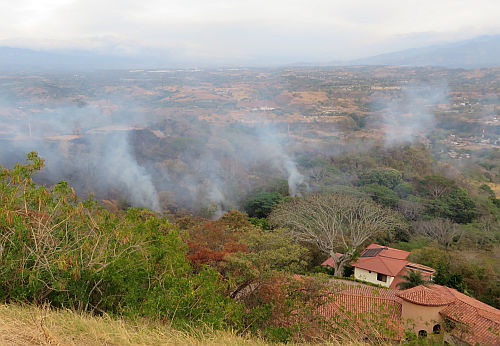 Ironically, I was going through my closet looking for clothing to donate to the fire victims of Heredia, Costa Rica when I smelled smoke. I walked outside and there were white particles floating in the air. Ashes!

Was this something I created in my head while I was thinking of the poor people who lost everything in a fire? Or was there really a fire?

As soon as I walked to the end of my driveway, I heard the crackling. That is when it hit home; the crackling. The sirens of the fire trucks took second place to the crackling which seemed to be creeping closer. Once my eyes registered the flames, it seemed to be getting louder. I could see the flames across the street which is far enough away to not seem like a danger to my house. But wait; the wind! The wind in Roca Verde swirls every-which-way through the hills and valleys; east, now west, then east again. The wind whips around so fast, east and west meld together and you’re simply in a vortex.

The fire could easily jump the road and it wouldn’t take much to ignite the dry foliage. Costa Rica’s dry season is from November to April or May. It rarely rains at all during this time and everything gets dry. The lawn in front of my house is emerald green in the rainy season; now, in March, it’s so dry it’s like walking over a  field of Rice Krispies.

Hearing the crackling, I flashed back to the limited fire-fighting training I had when I worked as crew on a charter boat. Our crew training included donning heavy fire-fighting gear and extinguishing a raging fire. Scary stuff. We were warned about boat fires while at sea. Nobody is coming; you are on your own. Oh, you could make a “May-Day” call, but by the time somebody could get to you, even if they could locate you,  it would be too late. We were instructed to put out the fire or get in the dinghy and get outta there before she blows!

Blows?! The gardener from the house closest to the approaching flames was walking down the hill while I was walking up to assess the situation. He said: “Es peligroso (dangerous). Gas. If the fire hits the gas line, it will blow up. Yikes!

I raced home and packed my evacuation bags: family photos, my rough draft of “It’s the Parsley”, a cookbook I’m working on, my jewelry, passport, cash, laptop, camera, three days worth of clothing, and Toby, the Chocolate Lab’s toys. Lucky me, I had several offers of places to go. People show their true colors in times of crisis.

Neighbors help neighbors. People speak to each other when, in normal times, months or even years go by without any exchange. I clearly remember the Santa Cruz earthquake of 1989. The whole neighborhood shared food, clothing and shelter for days while the after-shocks continued to rattle our homes.

Fire is nothing to be trifled with. Today I witnessed our Atenas Bomberos ( fire-fighters) run up and down the hill all day long dousing flames, going back to the station, re-filling the truck and dousing some more. They will be working through the night to keep us safe.

There are two sets of bags sitting by my front door; my evacuation bags and the donation bags for the people in Heredia who were fortunate to escape with their lives and little else.

Help if you can!